Looking For a Spoon

I was spending the weekend at a friend’s house.  I guess I was about 12 or so?  We had went to bed a little late watching TV and being silly.  I woke up and realized the house was quiet.  You know how it’s awkward to go through someone’s house even after her parents have said to feel free to get whatever you need…...still feels like an intrusion.

So I was laying in bed and waiting for my friend to wake up.  She was still snoring. After about 30 minutes or so, I needed to pee really bad and I was hungry.  So headed for the bathroom……….and then immediately for the kitchen.  There was cereal!  Yay!  And it was one of the brands my mom thought was too expensive!  Double Yay!  I found a bowl, got the milk and added it to the cereal.  Then I went to get a spoon.

Right there in the drawer was something that caught me completely off guard.  There were spoons, knives, forks all in the drawer.  There were no short straws.  I immediately turned around and looked at the kitchen table.  No mirrors.  It took some time.  I stood there looking around and felt like my mind was blank.  And then it all started crashing in on my brain and heart. It was my first and only “ah ha” moment.  My house wasn’t normal. My house was fucked up. Not my house..........my family. 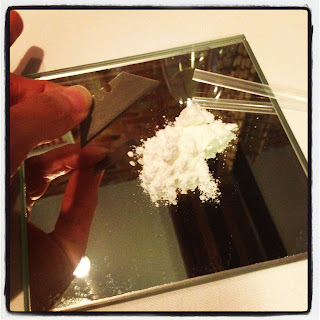 Later that day, I went home and looked around.  I went right to the kitchen and there was the mirror on the table.  Next to them were those old film bottles that look like pill bottles? My parents used those for weed, weed seeds, weed stems, hash, cocaine, etc. I walked over to the silverware drawer…...opened it…..yup…..short cut up straws.  I never said anything to my parents that day.  But my view of them became more focused.  I can see now that it was also the first time I’d judged my parents on the kind of parents they were toward us.

It wasn’t until years later when I had children of my own that I brought it up to my mother.  In my heart, I knew I was hoping for an apology but I knew that’s not the type of people they are.  Like a lot of people with a troubled past, it’s easier to act like it didn’t happen or wasn’t a big deal than to apologize.  It’s got to be difficult to sit in front of your children and acknowledge - hey I fucked up your childhood and I’m sorry.

My mom.  Mmm Mmm Mmm.  She’s not an easy person and her heart is closed (I believe out of guilt she won’t face).  So I asked her about it.  I didn’t tell her about my moment because I didn’t want her to feel compared to other parents.  I just wanted to see if she looked at that time as a mistake.  Guess what?  She didn’t say anything other than an offhanded “so what?” remark.  My mom.

People wonder how I could have distanced myself from my family.  If they knew my family, they’d wonder why I didn’t do it much sooner.
Posted by Pretty Unlimited at January 24, 2017