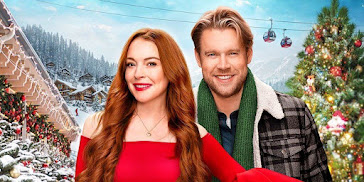 Netflix has been putting out some of the best Christmas movies over the last few years so I was really excited to see this new film from them.  The opening scenes of our lead character, Sierra, (played by Lindsay Lohan), and her 'dad' (go head Jack Wagner....still looking awesome!)  were already giving you an idea that she'd earned this reputation of the rich, spoiled princess but was trying to figure out her own place in the world.  It was a nice way to give us a mature version of this sort of story.
She has a boyfriend of sorts, Tad, (played by George Young who is hysterical) that is very funny in his portrayal of our obsession with social media.  I couldn't tell if I was rolling my eyes from the corniness or how it was hitting home.  LOL, probably some of both.  After some tumbles and laughter, we get to meet Jake (played by Chord Overstreet).  He's got some financial woes, a daughter, and a MIL, and doesn't know what to make of the lovely Sierra.
Will she change him for the better?  Will he change her for the better?  Will they discover Christmas?  This is a Christmas movie.......but even though you should know, I won't ruin it for you.  Lindsay Lohan is the lead for a reason, she's got everything you want in a lead.  Presence, talent, and a way of noticing her even when the other characters are speaking.  Can't wait to see what she does next.
Cute?  Yes.  Corny?  Yes.  Christmas?  Yes.  New storyline?  Nope.  Gave me the Christmas feels?  Yes.
I'll give this one a solid 3 out of 5 shots.  Yes, I'll be watching it again and again and again.

Posted by Pretty Unlimited at December 03, 2022