I really wish I had the courage to post a picture of the mess I created, but I might run for president some day and I choose to not ruin that possibility. Well, it's summertime again so all the ladies know it's definitely pass time to tidy up the bikini area for swimsuits. Which method do you use? Shaving? Nare lotion? Or waxing? I've always used the shaving or the Nare methods in the past. But I decided since the waxing was suppose to last for 8 weeks, I'd give it a go.

At this point, I'm a non religious person praying that the pain doesn't last for the 8 weeks that the bare skin is supposed to last. UGH!

I bought the Sally Hanson Brazilian Bikini Wax Kit. Just under $12 at my local CVS in Trenton, NJ. I brought it home, prepared the area to be waxed. I put myself in warm water to soft the hair after having cut it to the proper length. Not shorter than 1/4 inch and no longer than 1/2 inch. I'm not saying it was perfect, I didn't think to put a tape measure down there and who in the hell can judge the exact hair length between their legs down to the quarter inch? Seriously?

I put the wax in the microwave, got it perfectly warm and spreadable as per the directions. I then applied it following the growth direction of the hair, it was actually rather pleasant. Nice and warm, smelled like lavender, it was great so far. I then applied the strip to the warm wax, made sure it was smooth.

Then I let er rip.

O.H. M.Y. G.O.D. - my non religious self began to pray in earnest for a merciful God that would convert me to believe enough in him to take away my pain. As my thoughts started to become rational once again, I realized that while the paper had my hair and wax on it, it also contained a bit of skin (not much). And while this was true, it was also true that my inner thigh still contained hair and wax. Now what? I took the exceptionally tiny bottle of fix it oil that comes in the box and used the entire bottle to get this wax off me.

All this time, did I mention I was in the bathtub doing this? While getting the wax off of my skin, I never noticed that it was dripping a bit into the tub. Can you guess what happened? I slipped and fell completely out of the tub, landing on the floor next to the bathroom door. I landed on my shoulder, neck and head. My shoulder did hurt enough to distract from the waxing taxing I put myself through. Although that only last a few minutes. Then the giggles started. I was watching Extreme Makeover: Weight Loss edition during this whole thing....she was getting skin removal surgery and I was holding my skin in my hand on the waxed paper. Ugh, life can be a big ole joke sometimes.

Even in pain and completely in giggles, I couldn't leave the other side untouched. I shaved it. Done, with no pain. I went to our bedroom, showed my hubby the damaged I had caused and told him about falling out of the tub. He was concerned. My giggles just got worse as the pain got worse. Then he noticed a huge purple bruise where the blood had been brought to the surface through sheer force from the waxing. LOL, I was a goner, even more giggles.

Pretty safe bet I giggled myself to sleep. My hubby is probably still shaking his head. LOL
Posted by Pretty Unlimited at July 10, 2012

I have to say this story is painfully funny. Hope you don't have too many more experiences like this.

Anna and Khris return with a special Top 5 looking at the career and legacy (so far) of one of Hollywood's favorites, Tom Hanks. Both A... 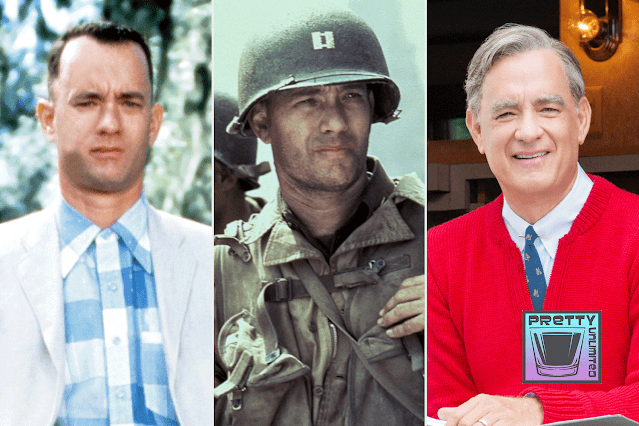